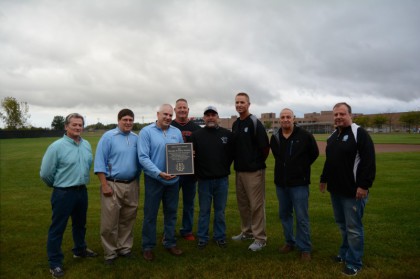 Almost exactly 1 year from the date ground was broken on the project, it seemed all to appropriate the weather was cold and raining as the Darby Baseball Community entered into the new practice facility for the  dedication ceremony.

The weather served as a reminder why the building was built. During the evening guests celebrated the hard work and donations that were required to complete the project.

The occupancy permit has been approved and the building is now ready for usage.

The evening's  speakers Thanked the building committee, DDC members, parents, friends of the program and community and business sponsors.   Coach Fugitt surprised John and Stacey Elavsky with a special announcement and by presenting a plaque officially naming the new building "The Elavsky Practice Facility" in recognition of their contributions and efforts to the

The indoor facility was funded by fundraising and private donations.

No money was provided by the Hilliard City School District for this facility.

The facility was  donated to the Hilliard City School District as a gift.

The following individuals served as the project development team to oversee the project. 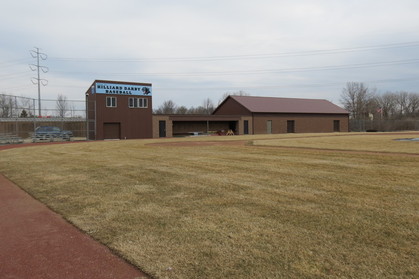 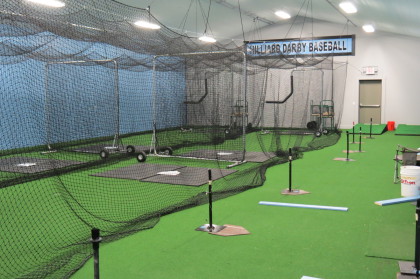 Concrete pad in the back of the facility is shown to the right.

July 2014  wall trim,  base trim,  exit signs, and too many small items to name were addressed. 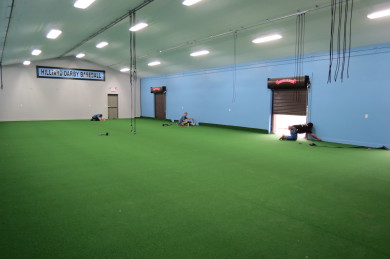 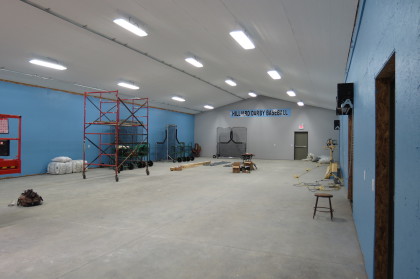 May 23, 2014 Lights installed, painting continues, Hilliard Darby Baseball sign proudly hanging in the building,  tracks for the cages being installed 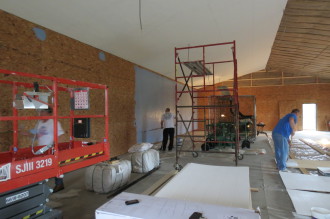 May 4 2014  This week the interior wall and ceiling materials were delivered and the ceiling and wall paint was purchased.   A portion of the walls were put up and over the weekend 100 ceiling sheets were painted and have begun to be hung on the ceiling.  Ceiling lights were ordered and should be arriving anytime.

4.25.2014  The insulation installation was completed today.  Inspection is scheduled for first thing next week.  We are now ready to install the ceiling and walls.

4.23.2014  The building passed the interior framing and fireblocking inspection today.  The building will soon have insulation installed.

4.11.2013  The Electrical Rough in was completed and passed inspection this week.  During this timeframe the DDC has been working to frame the interior walls and complete fireblocking on the building.

3.19.2014  For 4 days straight the members of the building committee took turns filling a large kerosene heater to keep it running all day and night to thaw the ground.  Large fans were also ran during this timeframe to help evaporate the ground moisture as it rose to the surface.   These efforts and additional costs incurred will allow us to pour concrete this week as the outside temperatures are forecasted to remain above the freezing point for the concrete to cure.  Today the floor was given a fine grade and a vapor barrier was placed over the pour area.  Concrete will be poured later this week!!!

3.01.2014   Gutters were installed on the building today.  Cold weather continues to delay pouring the concrete flooring.  Sponsorship drive activities continue as we are currently at 49% of our goal.

2.19.2014  The building committee met to plan out the final steps required to obtain occupancy of the facility.

1.29.2014  With the extremely cold weather we have been unable to pour concrete inside the building.  The committee is awaiting the final electrical drawings for permit approval to begin the electrical work.

1.19.2014  The building committee met this week to review funding status and discuss options for concrete and electrical installation.  Poor weather has not allowed the builder to install the roof ridge as it has not been safe to be on the metal roof.  The man doors are scheduled to arrive this week and after installation the final pieces of siding can be installed.  Estimates and bids for concrete and electrical work are being obtained however the ability to execute on these items hinges on the sucess of the sponsorship program currently on-going.  If you are a potential sponsor we hope you will help us meet our financial goal and if you are a parent your help in contacting potential sponsors is key in obtaining final occupancy for the team.

1.11.2014  The Overhead Door company installed the three roll up doors and the builder continues to make progress on siding the facility.  Siding is completed on the North and South sides of the building and paritally finished on the East side of the facility.  Man doors were ordered and items for electrical work are being finalized.   We will be keeping an eye on the weather and seeking volunteers in the near future to help with several items so we can proceed with pouring the concrete floor.

1.07.2014  The extremely cold temperatures have halted activity the past three days.

1.02.2014  A snowstorm and cold temperatures made working conditions difficult once again, however, progress was made and the north face of the building was sided today. 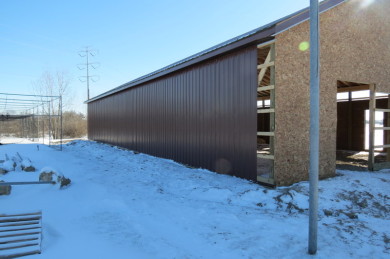 12.30.2013  AEP visited the site today to provide options for electrical service. Posts for the doors were put in place and framing work continued.  The building framing will be inspected soon.

12.28.2013  Excellent weather and plenty of volunteer help allowed great progress to be made.  The metal roof was installed, truss straps were installed, soffets were installed (by the Pelphrey ladies), the warning track was cleaned up, scrap and trash was removed from the work site, and holes were dug for post installation for the building doors.

12.27.2013 Felt paper was placed on the roof today and framing work continued.

12.23.2013  The drain tile for the south side of the building was put into place today.  Special Thanks to Joey Estepp and Christopher Schultz for helping dig the trench and cover the tile with gravel. 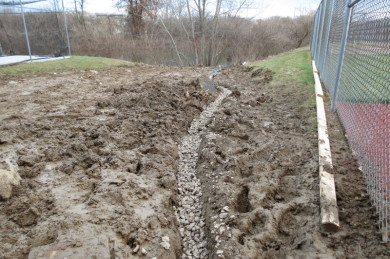 12.22.2013 What a difference a day makes.  As bad as yesterday's weather was today was a beautiful day!!!  The south wall facing the field is finished.  This is a big relief to the building committee as cold temperatures would halt the building process if the south wall could not have been constructed.

12.21.2013 Continuous rain made working conditions extremely difficult.  Even with the south side of the building covered the saturated ground quickly became a mud pit as the masons constructed the wall.  That being said the south wall is approximately 50% percent complete.  Angle iron for the block wall was sanded and primed with rust resistant paint and is ready to be installed by the masons. 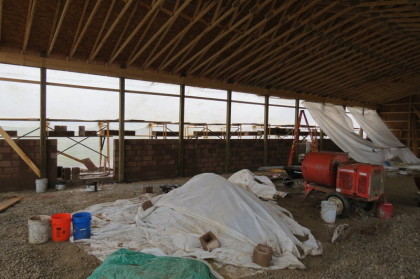 12.19.2013  With warmer temperatures preparations were made to construct the South block wall today.  Rain is expected this weekend however work will continue.  A cover was constructed, scaffolding is in place and the block has been staged to construct the wall.  The photos below show the progress made today including addition of plywood to the west side of the building.

12.14-18.2013 Poor weather conditions halted building activity.  During this timeframe the building committee has used this time to obtain quotes and information on the electrical layout, heating options, and source field turf for the facility.  WIth warmer temperatures we will be taking full advantage of the weather for progress beginning on Thursday Dec 19th.

12.13.2013  The subroofing was completed today.  Framing work continues on the walls and openings of the building.

12.12.2013 Building team members met to discuss the current building status.  A detailed review of the facility costs were reviewed as well as planning to complete the builiding.  Over $48,000 has been obligated in site preparations and material costs to date.   As discussed in the DDC meetings, funding is in place to cover the costs associated with the building structure but not enough funding is in place to meet the final occupancy needs at this point.  The DDC is currently conducting fundraising efforts to cover electrical-heating needs / field turf / and numerous items needed to obtain occupancy.  Exterior aesthetics (final grading, seeding, approach) will be addressed in the spring.  Our goal remains to occupy the facility this winter.  The success of the club's ongoing fundrasing efforts and in particular the sponsorship drive will determine when the team can enter the facility.

12.10.2013  Below normal temperatures continue.  The subroofing was nearly completed today.  Pictures taken today are shown below.

12.09.2013  The trusses were lifted into place and installed today.  The structure is now starting to really take form.

12.08.2013  With the extremely cold weather it was important to get the underground block backfilled before the excavated dirt was frozen solid.  Volunteers worked this morning and completed the backfill.  When folks come together alot can be accomplished in a short period of time.  A special Thank You!!! goes out to the two Messer boys as they shoveled gravel the entire morning and enabled a bunch of old men to be home well before lunch time.  Thank You!!! to the parents who stepped up to help this morning!!!

12.07.2013  Truss supports were placed on the building,  the footer on the south wall was partially backfilled.  Drain tile was set in the block wall footer. Volunteers are being requested for Sunday, Dec 8th from 8:30am - 10:30am to help keep the building progress moving forward.

12.05.2013  The block for the south wall was delivered along with sand and mortar to construct the wall both below and above ground.

12.04.2013  Excellent progress was made on the building again today.  The building posts were set in place and anchored to the concrete footer. 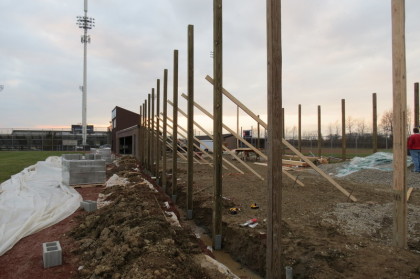 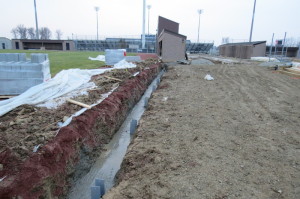 12.03.2013  The footer opening was covered during last night's rain and the concrete footer (shown above) for the block wall was poured today.

The post holes for the building are in and are ready for inspection.

To take advantage of expected warmer temperatures this week the footer was dug today for the block wall on the south side of the building.  We are hoping to coordinate a concrete pour this week.  Pictures of the dig are shown below. 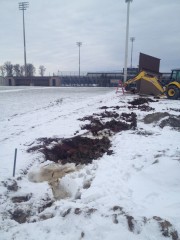 While most were preparing for Thanksgiving dinner volunteers from the DDC were working to keep the building on schedule.  The fencing was removed in preparation to dig the building footer.

The City of Hilliard presented the DDC an approved building permit today!!!  Building materials will be ordered tomorrow for the building construction.  We are resetting the build timeline and will keep everyone up to date on the progress here on the website. 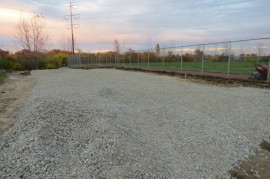 11.05.2013 The site preparation continues.  The first of two gravel deliveries has been made and soon will be compacted. Upon completion of the 2nd delivery and prep the  site will be ready to start construction.

The weather got better each day and in three days from daybreak to sundown the fill was moved and compacted into the building site.  The slideshow below shows the progress made. 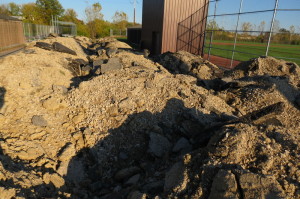 Nearly 50 loads of fill have been delivered to the building site to level the location where the building will be built.  The actual site preparation is about to begin. 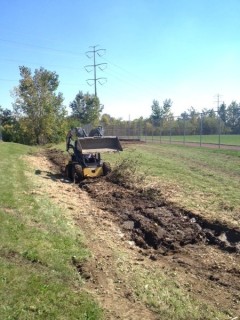 The building site has been cleared and is ready to be filled.  The dirt storage areas previously located next to the Panther bullpens along with the diamond mix and red brick topping were also moved to a new location.

The photos below show the location of the new facility prior to breaking ground. 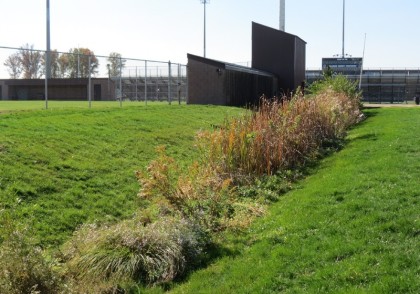 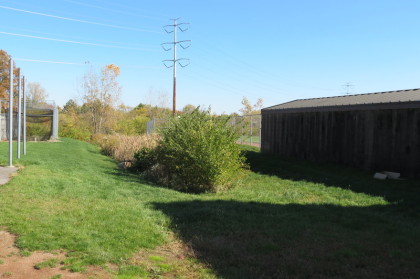 Parents Meeting  in the Media Center

2nd Tuesday of each month

The DDC is on

Please use for donations and membership payment options.

The HBA plays a major role in supporting the entire Hilliard Baseball Community through it's Recreational Leagues, Travel Teams, and Buddy Ball.  Thank You to the HBA for their support!!!

Be Sure to Visit